Current facilities in the Department of Theatre include:

The Centre for Film and Theatre

The Department of Theatre is housed in the Centre for Film and Theatre (CFT), which it shares with the Department of Film. Opened in 1990, CFT boasts an array of modern, well-equipped facilities for performers, designers and technicians, including acting studios, design labs and studios, and carpentry and costume shops. The centerpiece of the building is the Joseph G. Green Studio Theatre, a fully-equipped black box studio theatre, seating up to 130 spectators in a variety of configurations. In the same building complex, the Program has access to the much larger Burton Auditorium, an amphitheatre-style performance venue with a seating capacity of 600.  All these facilities are in constant use, both for teaching and for the rehearsal and technical preparation of Program productions. A spacious atrium area and cafeteria facility, shared by the adjacent Joan & Martin Goldfarb Centre for Fine Arts housing the  Department of Visual Arts, makes CFT a hub of creative activity on the campus.

The Program's set, costume and prop-building facilities rival those of many of the best professional facilities in Canada. Our wardrobe inventory is the envy of many professional companies.

The Graduate Program in Theatre also has the use of two rehearsal/ performance studios in nearby Atkinson College. The large studio has the capability of being outfitted for performance.

Graduate students may reserve time in the three acting studios in the Centre for Film and Theatre; are given access cards to the ACE acting studios for rehearsals; and may book the spaces in Atkinson for private or group rehearsals or other studio work when not in use for classes. 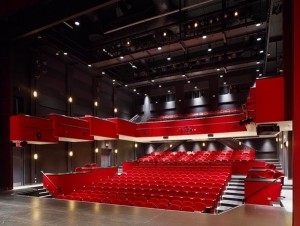 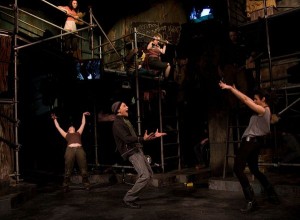 Crew Call and Rehearsal for "Ti-Jean and His Brothers" by Derek Walcott, directed by Marvin Ishmael