There are two directing fields available in the MFA in Theatre. Both are two-year, 5-semester intensive conservatory programs for advanced theatre artists.

This program is designed for those with a special interest in directing theatre. In addition to their core course work which includes seminars on Directing, Design, and practicum— where students work directly with grad and undergrad actors. Courses in Dance, Music and Digital Media are available to enrich the students areas of interest. In addition to studio projects in both first and second year, students also direct a production for their MFA thesis. 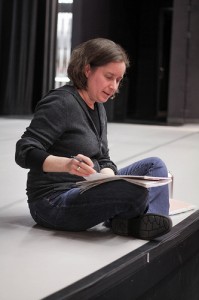 Director Alison Humphrey (MFA 2013) gives notes during rehearsal for A Midsummer Night's Dream on the stage of the Faire Fecan Theatre.

York's program in Directing offers students an opportunity to hone their directing skills with in depth study and practical application to plays staged in studio and on our mainstage. In addition to their core course work which includes seminars on Directing, Design, and a practicum where students work with grad and undergrad actors, Directors have the opportunity to study in the many departments in our faculty as time permits. In the first year of study, Directors direct a collective creation project, a Shakespeare project, and two or three unmounted productions. In the second year of study, in addition to ongoing studio projects, students also direct a fully-mounted Theatre @ York production for their MFA thesis.

Each director’s program is assigned by the Director of the Graduate Program in Theatre based on individual needs. Curriculum components include: