Every year York's Department of Theatre presents a full season of events, ranging from fully-mounted productions presented by the department's repertoire company, Theatre @ York, to informal studio presentations, collective creations, workshops, stage design exhibits and talks showcasing resident and guest talent. Many of these presentations feature the work of graduate students in the MFA program in Theatre. 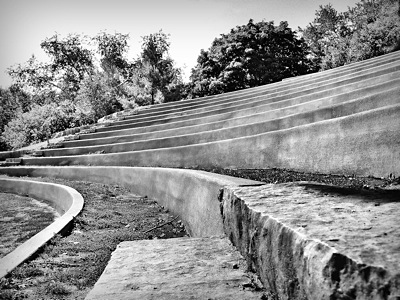 In a press release, The Canadian Stage Company announced just how successful this summer's Shakespeare in High Park season was: with record-breaking crowds, in spite of a fairly raining season, the shows were hugely popular with audiences flocking to the outdoor amphitheatre to see Macbeth and The Taming of the Shrew. Directed by MFA in Stage Direction in collaboration with Canadian Stage students Ker Wells and Ted Witzel, the shows did very well at the box office and helped to promote Canadian Stage's 2013–14 season subscriptions.

“In its 31st year, Shakespeare in High Park has proven, without a doubt, it is one of the city’s favourite summer traditions with an incredibly enthusiastic and dedicated audience joining us on the hill night after night,” said Matthew Jocelyn, artistic & general director, Canadian Stage.

This week sees two new students entering the next cohort of the prestigious MFA program: Estelle Shook, former artistic director of the Caravan Farm Theatre and 2011 director of The Winter’s Tale at Shakespeare in High Park for Canadian Stage, and Matjash Mrozewski, an internationally recognized choreographer based in Montreal who trained at the National Ballet School. At York, the students will be supervised by directing professors Ines Buchli and Paul Lampert while simultaneously receiving guidance from our two incoming mentors, Peter Hinton (Shaw Festival, National Arts Centre) and Chris Abraham (Stratford Festival, Crow’s Theatre). In addition to collaborating regularly with Jocelyn, their mentors and various artists at Canadian Stage, both candidates will be supported by Birgit Schreyer Duarte, who joins Canadian Stage as artistic and dramaturgical consultant focusing on programming and coordinating the theatre company's component of the MFA program.

Award-winning director Kim Collier, as resident artist at Canadian Stage, played a pivotal role in conceptualizing and implementing the company’s participation in the collaborative MFA program. Working tirelessly with Wells and Witzel to support their professional development through involvement in artistic projects at Canadian Stage, Collier was a key contributor to the success of the MFA program in its first two years, making her an invaluable collaborator. As the first graduates complete their degrees in Stage Directing in York’s Department of Theatre, Collier concludes her time at Canadian Stage to pursue other projects.

Canadian Stage will open its 2013.2014 theatre season at the Berkeley Street Theatre with two plays by Québécois playwright Sarah Berthiaume, The Flood Thereafter (September 22 to October 6) and Yukonstyle (October 13 to 27), directed by Wells and Witzel, respectively.

For more in depth stories about our Faculty, Staff and Alumni, please visit our  Department of Theatre Events Calendar and News pages.